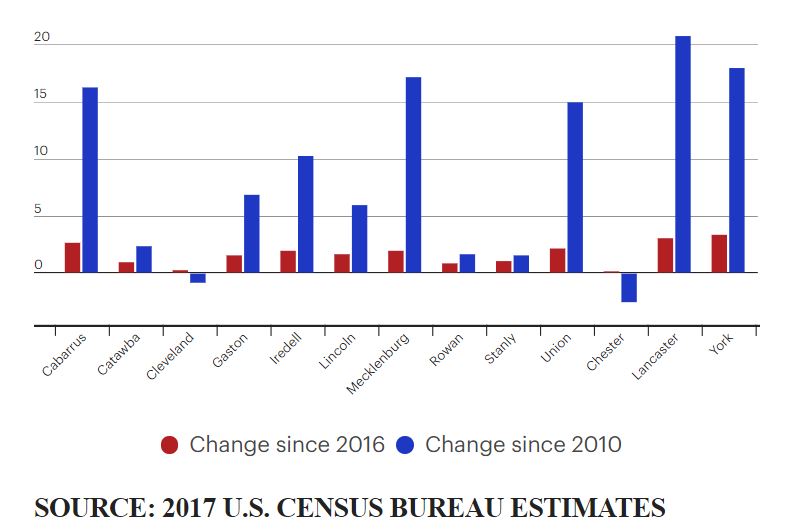 The Charlotte metropolitan statistical area averaged in the ballpark of nearly 1,000 new residents a week during the year timespan that ended July 2017, according to population estimates released Thursday by the U.S. Census Bureau.

The new data shows metro Charlotte’s population growing by 49,786 people between July 2016 and 2017 — a 2% increase, matching a similar pace set in the past couple of years. That equates to a net gain averaging about 136 people a day.

The Census Bureau pegged the number of denizens across the Charlotte-Concord-Gastonia region at about 2.5 million as of mid-2017.

Since the 2010 Census figures, when the area’s population tallied at 2.2 million, the local population has posted double-digit growth, at almost 14%.

In addition to Mecklenburg, Lancaster, York, Cabarrus, Union and Iredell counties have also grown in population by at least 10% since the 2010 Census. Lancaster County, with an estimated 92,550 residents, grew at the highest clip during that seven-year period: 20.7%.

The graph below provides a full look at the growth patterns of Mecklenburg and its surrounding counties.

North Carolina’s population as of mid-2017 came in at an estimated 10.3 million, up by about 1.2% from the previous year. For a snapshot of which of the largest North Carolina metro areas led the state in growth rate since the 2010 Census, check out the accompanying slideshow.

As for the nation as a whole, Southern and Western metro areas added the highest number of new residents in 2017. The Dallas-Fort Worth-Alrington metro area led the U.S., adding 146,238 residents. Here are those other top 10 metros: